The January 2023 fad for educational technology folks is to do a blog post about ChatGPT. And with good reason! Educators everywhere are wondering: Will AI tools like ChatGPT change how we teach and how we assess our learners? A lot of educators think it will. We’ll focus on answering those questions in this blog post.

ChatGPT is the first really big AI–or artificial intelligence–tool to come out. There certainly have been other impressive AI tools before it, but this one got many in the educational community all stirred up when it came out at the end of November.

What you think of ChatGPT will depend on your perspective.
🍎 For most educators, it’s scary because it’ll mean we probably have to change the way we assess student learning.
🍏 For others, it’s exciting, because it’ll increase what all humans are capable of.
Let’s focus on that first group though – if you’re nervous about ChatGPT, I have good news:

So, based on these 4 things, it’s probably not going to upset the apple cart right now. However, I am certain that it is a sign that things will be – and are – changing and the time to start thinking about this is now.  First, we have to understand what it is, so let’s dive into that.

ChatGPT: What is it? 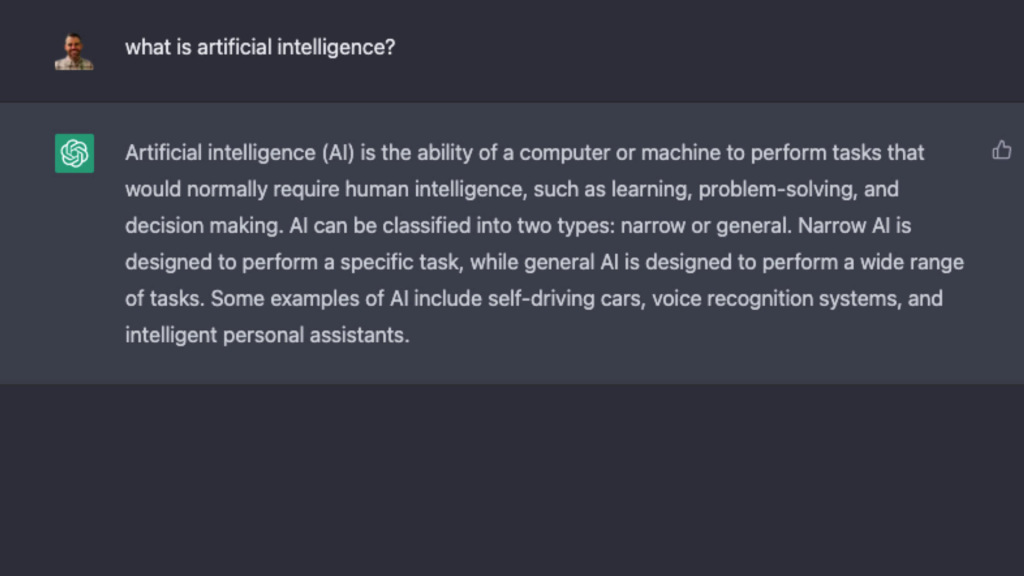 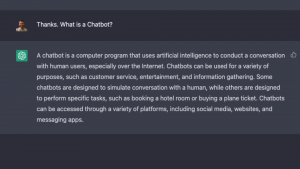 You have probably interacted with artificial intelligence chatbots before – often customer service chatbots on many websites. ChatGPT is like that, but better. The chatbot on your shopping app or your bank’s app typically identifies words in your request, searches its own database of support articles, and recommends the article that most closely matches your query. Those chatbots are essentially search tools with some conversational ability. They’re limited to the information that’s been loaded into their database and, in those cases, it’s typically just that company’s support articles. They all use what’s called natural language processing to understand and respond to humans. I find that many of those support chatbots struggle with this, possibly because of the limitations of their database of information that they can provide.

ChatGPT: How is it different from other AI tools and chatbots? 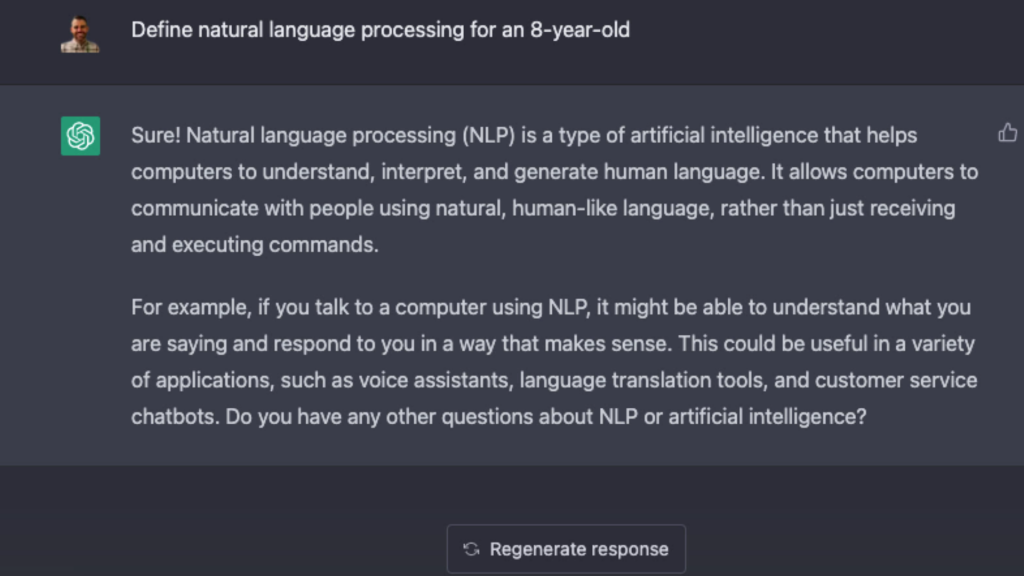 Compared to those chatbots on other websites, ChatGPT searches a more extensive database of information that was loaded into it. Its AI trainers–those are actual humans–will then look at its interactions with its users and add to that database accordingly. It’s likely that in the future, this will happen automatically. When you talk to it, it’s not just searching a tiny amount of preset content like a customer support chatbot, but it is not searching all of the information on Google either. It’s searching data and information that was loaded into it. 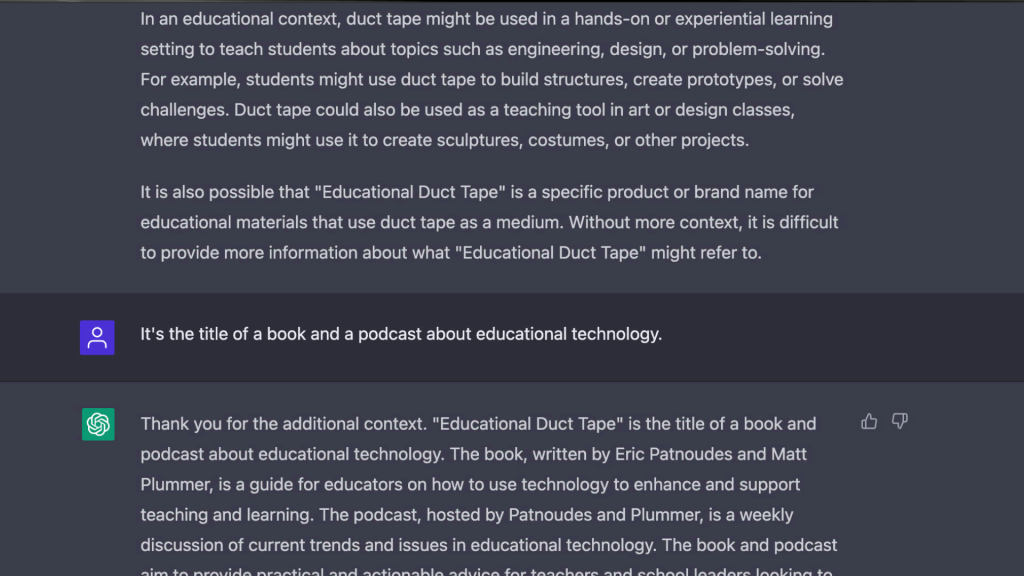 Its limited database means, by the way, that it’s not guaranteed to be 100% accurate. For example, when I first asked it about Educational Duct Tape, it was unfamiliar with my book. It did, however, try to guess what the term Educational Duct Tape might mean. When I told it that it was a book, it apologized and then told me it was a book and incorrectly listed the names of two authors, neither of which were me. So, yeah, not 100% accurate. Coincidentally, when I next asked it about Educational Duct Tape, it admitted that it did not know and did not even attempt to guess the author’s name.

The way ChatGPT works also means that there can be bias in its responses. Pick a controversial topic, for example, to ask it about and you may find that its response leans one way or another because of the information that was loaded into it. 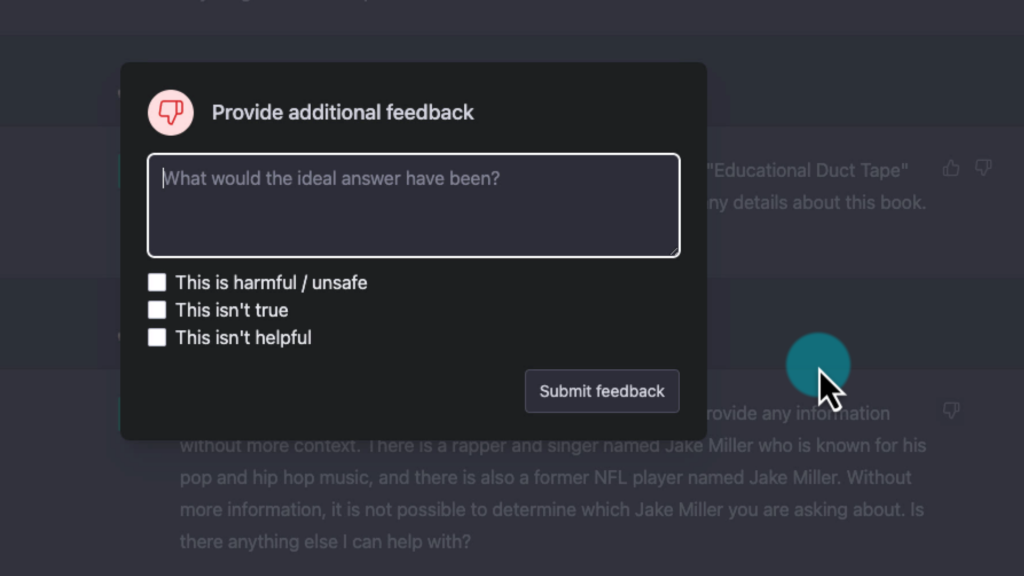 Both of these issues are part of why we currently have access to this tool. ChatGPT is in a research preview or public beta right now. So, it’s not a polished, completed project yet. Instead, it’s out there for us to mess around with. And that’s not necessarily because the creators are generous – it’s because they want to learn from its interactions with us.

You can use the thumbs-up and thumbs-down options to rate its responses. You can also elaborate on that feedback as well. I have noticed that it’s improved since I first interacted with it, so there may be some tweaking happening as time passes. For example, I once asked it who Jake Miller was and it told me about the singer.  The next time, it explained that there are several Jake Miller’s, but that two famous ones were the singer and an NFL player (that was news to me). Anyhow, it did better. 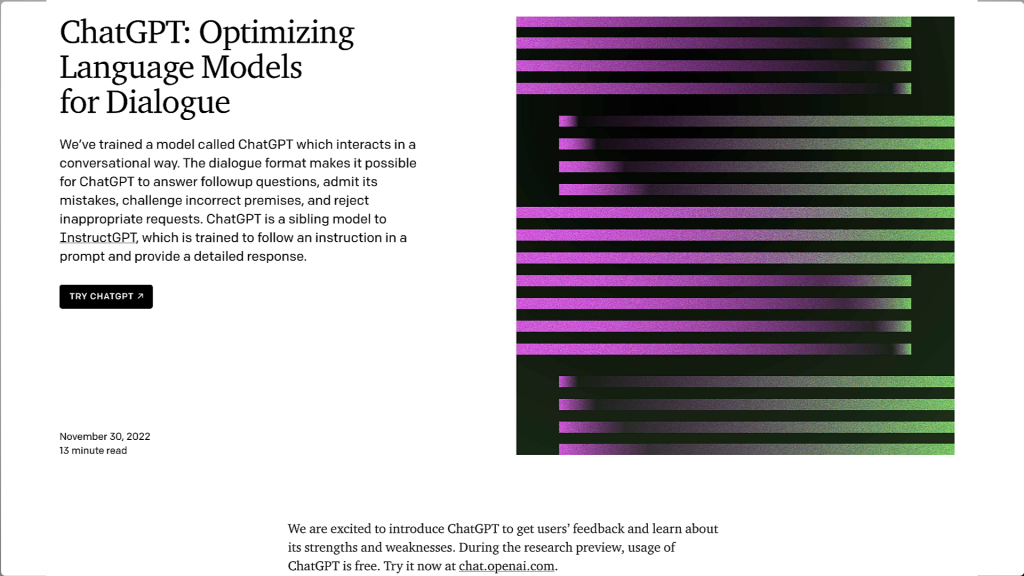 The blog post that announced the availability of the beta states “We’ve trained a model called ChatGPT which interacts in a conversational way. The dialogue format makes it possible for ChatGPT to answer followup questions, admit its mistakes, challenge incorrect premises, and reject inappropriate requests.”

They do concede that a limitation of ChatGPT is that it “sometimes writes plausible-sounding but incorrect or nonsensical answers” and that if the user’s request is ambiguous or unclear the “current models usually guess what the user intended” rather than “asking clarifying questions.” In my testing, I saw it do both of those things.  As for the inappropriate requests, they’re working to have it deny them using a tool called Moderation API to “warn or block certain types of unsafe content.” As with all of the other elements of the tool, though, this is something that they’re probably still working on through this beta.

When you start using ChatGPT, it tells you right away that it’s a “free research preview” and that it “may occasionally generate incorrect or misleading information and produce offensive or biased content.” It also reminds us that “It is not intended to give advice.”

It also informs you that your conversations ”may be reviewed by [their] AI trainers to improve [their] systems.”

ChatGPT: Do we need to be worried about students using it?

Before we get into classroom implications, I want to point out a few things: 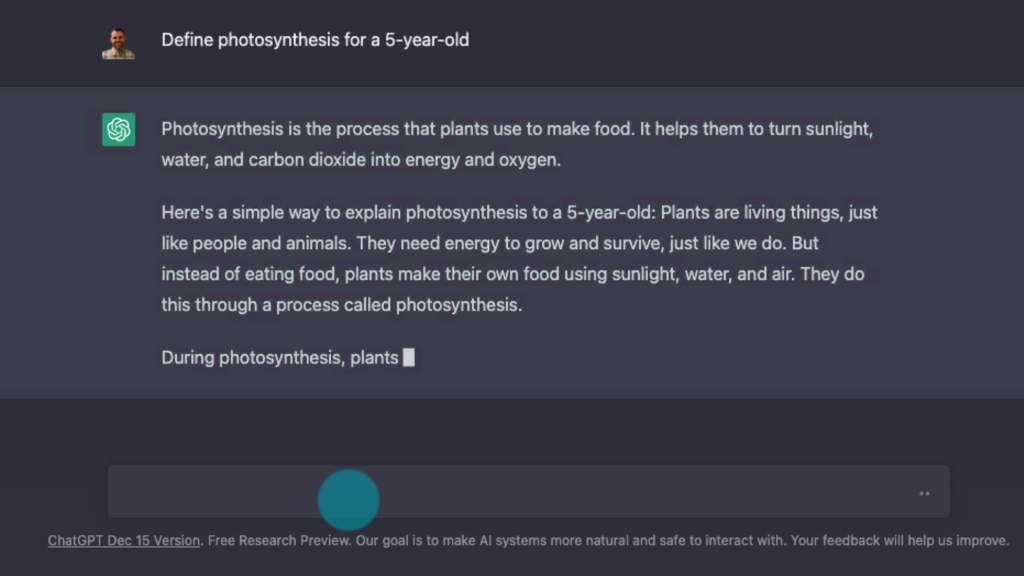 Before we get into the bad parts, which is where many of your minds probably went, let’s talk about the benefits. There are a lot: 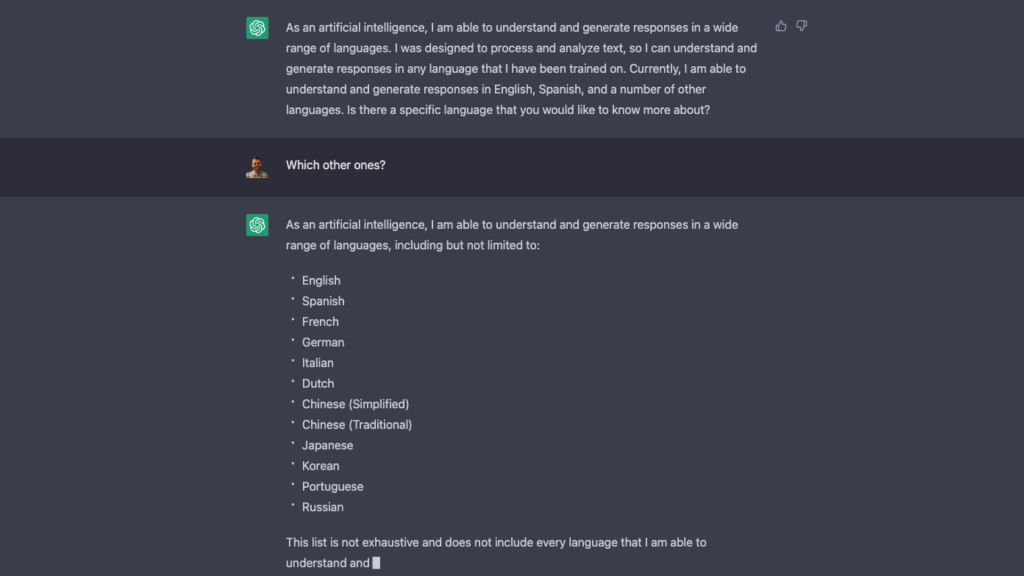 For you, the educator, it can take things off of your plate like: 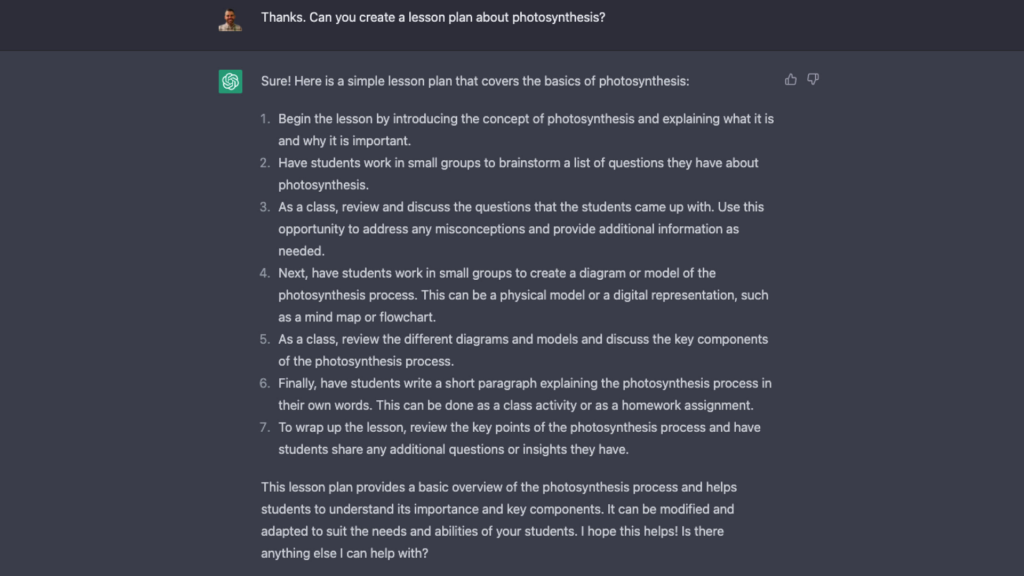 That, obviously, leads us to the negatives: 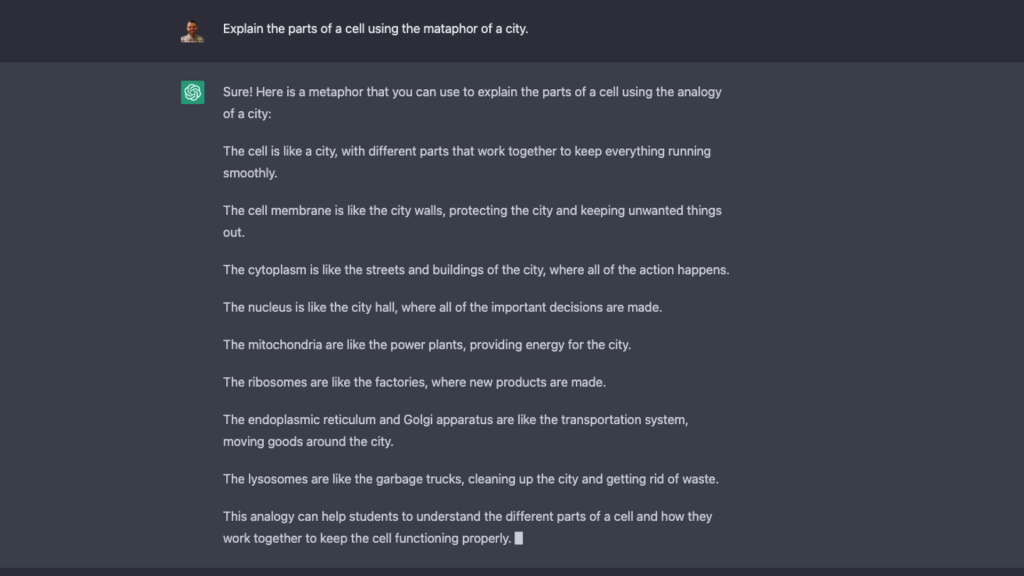 By the way, an article from Forbes pointed out a great way to avoid these issues: put your prompt into ChatGPT and see if it gives a good response.  If it does, you may need a new prompt! For example, I tried out one of the classic science prompts – “explain the parts of a cell using the metaphor of a city” and ChatGPT nailed it. So, you may choose not to use that one anymore.

But writing tasks isn’t its only feature – it can even solve math problems and show you the steps as it goes! 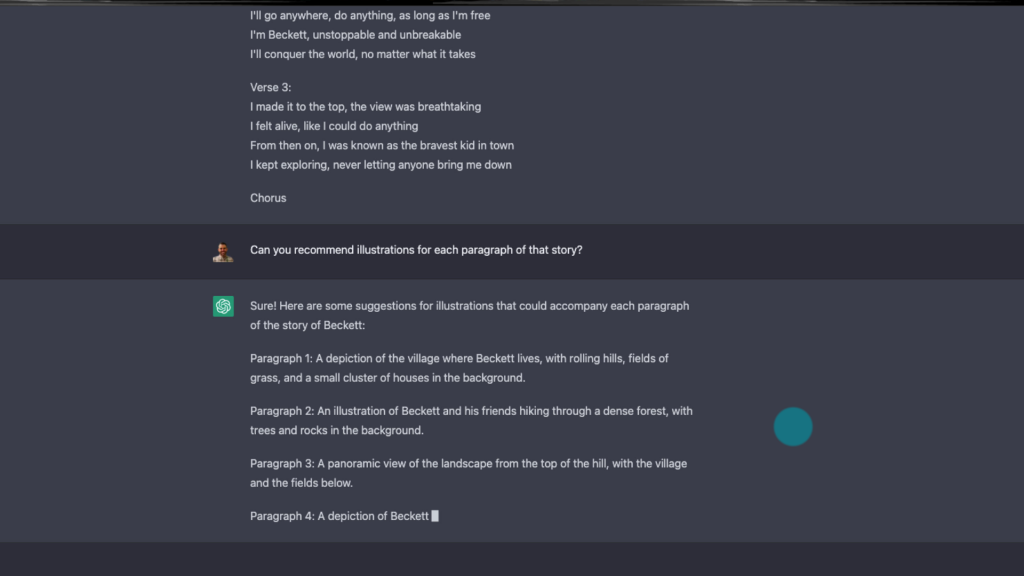 A few fun applications of this tool: my son and I had a blast having it generate stories and then turn them into sea chanties, poems, songs, rap battles, and show scripts. I also love that it can also suggest illustrations for the pages of a story that it generates.

Tony Vincent shared an example of asking it to generate some HTML code for him – and it was accurate code that he was able to copy and use on his site.

This is just the beginning. Tech will never look the same again. Many folks have pointed out that this is the MySpace or Atari or Commodore 64 of AI. Our students will look back at this someday and laugh.

The question most educators and schools are asking, or have already asked and answered, is: Should we block it? Well, there are pros and cons. A few questions:

Notice and consider those parallels. If you block it, what about when the next one comes out? There will be other AI chatbots and tools; this is just the first high-powered one.

And even if you do block it, they can use it at home.

Regardless of whether you believe it should be blocked or permitted, I think it makes sense for us all to block it at least until you have put in the work necessary to plan how we make it a beneficial and effectively-used element of our students’ learning experiences, not a tool to avoid. This will probably involve some discussions with your colleagues and, more importantly, your learners.

By the way, imagine if more schools had done this effectively with cell phones before they were in the hands of all learners and before the pandemic made them a part of our young people’s everyday lives. For now, not all of our students will have access to AI, but someday they will. How can we get them ready? How can we scaffold it into their learning environments?

I don’t know the answers, but I know that it’s time to start asking those questions and discussing it.

I did a lot of reading and video-watching about AI and ChatGPT to prepare for covering this topic, so if you want to go further – check out some of the links below. These are the ones that I referenced in this post, but if you reach out to me, I can provide additional resources. I will say, the blog post on the Ditch That Textbook site is by far the most extensive.

“ChatGPT, Chatbots and Artificial Intelligence in Education” – Ditch That Textbook

Forbes – “No, ChatGPT Is Not The End Of High School English. But Here’s The Useful Tool It Offers Teachers.”

Jake is the host of the Educational Duct Tape podcast, the #EduGIF Guy, a Tech Integration Coach, speaker, Former STEM, Math & Science Teacher, and a presenter. View all posts by Jake Miller